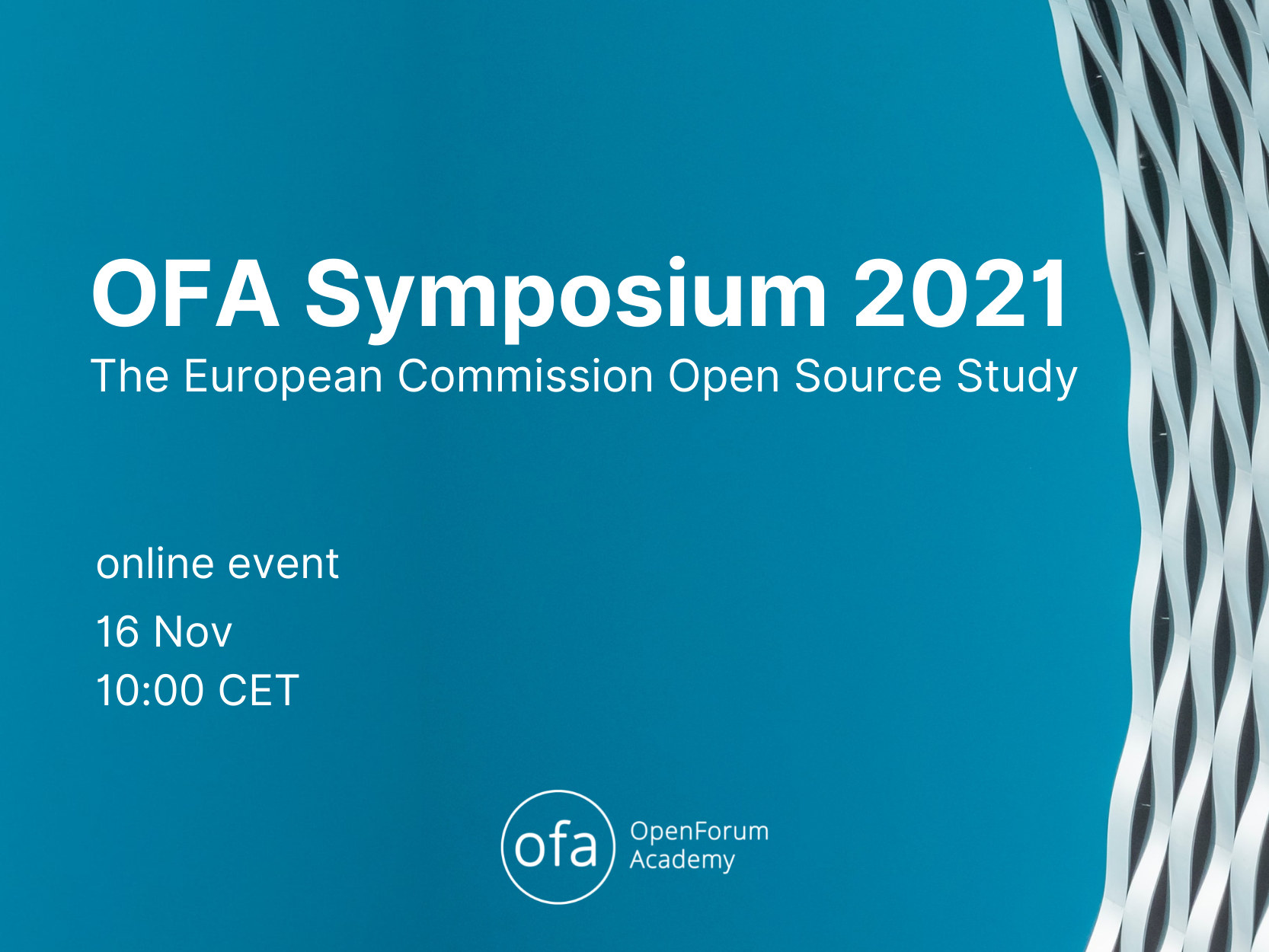 The OpenForum Academy (OFA) symposium offers the opportunity for critical and scholarly discourse on the European Commission study on “The impact of Open Source Software and Hardware on technological independence, competitiveness and innovation in the EU economy”.

We are delighted by the publication of the final study report and we expect it to shape Open Source policy for years to come.

The symposium will allow researchers in the field to exchange on the latest Open Source research, identify research gaps and contextualise their research with the findings from the European Commission study. The recording will be published after the conclusion of the event.

The study was conducted by Fraunhofer ISI, OpenForum Europe, Andrew Katz and Mirko Boehm. The authors of the study will be present to discuss decisions taken, motivations and outcomes beyond the final report.

Fully online due to ongoing restrictions

The Economic Impact of Open Source: The EU Dimension

The Economic Impact of Open Source: The EU Perspective

This presentation will showcase recent work on the geography of open source software developers. Motivated by recent work showing that many positive externalities created by OSS developers accrue locally, we map active GitHub developers at various spatial scales. Despite a strong correlation with economic development, OSS activity differs significantly across countries and regions in idiosyncratic ways. Within countries OSS developers are even more concentrated than R&D workers – suggesting that policymakers should consider cluster policy tools when seeking to promote OSS.

Approaches to making open source the default in academia

This presentation will showcase two studies I recently completed that look at the potential to accelerate scientific progress by advancing the spread of open access and free and open source software and hardware in academia. The studies surveyed university professors in Canada and the US to determine their willingness accept open source (OS) endowed chair professorships. To obtain such an open source endowed chair, in addition to demonstrated excellence in their field, a professor would need to agree to: i) ensuring all of their writing is distributed via open access and ii) releasing all of their intellectual contributions in the public domain or under appropriate open source licenses. The results of this survey study showed that the vast majority of Canadian and American faculty respondents would be willing to accept the terms of an OS endowed professorship. These results show that, in North America, there is widespread shared sentiment in favor of knowledge sharing among academics and that open source endowed professorships would be an effective way to catalyze increased sharing for the benefit of research in general. The presentation will conclude with recommendations for setting up such endowed professorships and ways to estimate the return on investment for scientific funders.

What does it mean for IT organizations to be involved in open source communities?

Creating the conditions for success for open source in government

Public Digital recently published a short report “Open source in government: creating the conditions for success”. It is based on a series of interviews with government decision-makers, technical experts, funders and people delivering digital services to citizens. The report is centred around adoption of open source software solutions that support mission-critical public services, and platforms that form part of a government’s digital infrastructure (sometimes referred to as Digital Public Infrastructure, or DPI). We see open source as an essential part of the tool box when supporting organisations, and governments in particular, navigate the process of digital transformation and meeting the expectations of our users. What we learnt from our research is that open source for open sources sake is not the answer, and can be just as disastrous as big bang proprietary tech projects if the right foundations are not in place. In the development and use of larger scale services and infrastructure, a decision between a proprietary solution and an open source software alternative becomes more complex: as the advantages of open source software meet the reality of implementing any kind of large scale technology program in government. We have set out an Open Source Capability Model for Governments, providing a self-assessment tool which will assist governments to adopt open source practices, calibrate their current policy and technical environment, and create the right conditionsfor success.

To harness the potential of new technologies while minimizing their risks, the EU has long relied on the so-called precautionary principle. However, questions have arisen recently about the scope of the precautionary principle and the relationship between precaution and innovation. Given the EU’s comparatively weak position in the global technology industry, some have suggested that EU regulators should apply the precautionary principle to a narrower range of cases and counterbalance it with the so-called innovation principle. At the same time, the innovation principle should not be used to adopt a regulatory laissez-faire approach that exposes EU citizens to a high amount of risk in order to foster innovation. In recent years, resilience has been recognized as an important concept for balancing precaution and innovation. The resilience perspective acknowledges that not all risks of new technologies can be anticipated and therefore advocates the creation of societies that can absorb future shocks stemming from technological innovation. According to the OECD, investing in three different types of capacities can strengthen resilience: absorptive capacity, adaptive capacity, and transformative capacity. The use of open standards and open source software (OSS) contributes to all three dimensions. When it comes to absorbing the impacts of shocks, open standards and OSS are helpful because they allow governments to make quick changes to important technological applications and infrastructure. The use of OSS and open standards also allows governments to adapt in response to shocks or longer-term changes, thus contributing to the second dimension of resilience (adaptive capacity). As regards the third dimension of resilience – transformative capacity – OSS and open standards can similarly help to ease the transition to new technological solutions. This presentation will explain in more detail why the resilience perspective is so valuable and how OSS and open standards contribute to all dimensions of resilience.

What Makes an Open Source Project Critical to a Democratic Group

Civil society, markets, and governments all rely on digital infrastructures that are built, at least in part, upon open source (OS). When are these infrastructures considered critical and what are regulatory and other implications of an infrastructure’s criticality? Critical for whom, and for what purposes? Our paper is motivated by two interrelated questions: 1) What is “critical digital infrastructure”?; 2) What makes an OS project critical digital infrastructure? In particular, what is critical to a democratic group/society? In answering these questions, we hope to bridge a quest for a legal or policy definition of critical digital infrastructure with an investigation of the values, methods, and funding relationships of the groups that build OS projects. Methodologically, we combined legal research and analysis with ethnography. We examined scholarly and regulatory definitions of infrastructure and sought to understand how the legal system (particularly in the US) treats digital infrastructure and software. Hoping to draw lessons from regulation of non-digital public goods and utilities, we also explored how utilities regulations at the federal, state, and local levels approach criticality – if at all. Second, we conducted an ethnographic study comprising participant observation (52 hours) and long-form interviews (17) with communities and actors that build and use OS tools particularly civil society communities who have democratic self-governance as a core value. This surfaced a handful of digital tools, which were identified as critical (hardware, software, firmware). Even more so, we found that the “infrastructure under the infrastructure” of both democratic practice and OS projects is participation. We identify three key causes of participatory failures which lead to OS infrastructural failure: economic/labor, socio-cultural, and a lack of governance and synthesis mechanisms for a workflow that is complex and distributed. We suggest steps for further research to address these failures in both social and digital design. *This research was supported by a Ford Foundation “Critical Digital Infrastructure” research grant.

X-Road® is open-source software and ecosystem solution that provides unified and secure data exchange between organisations. X-Road is a digital public good verified by the Digital Public Goods Alliance, and it’s released under the MIT open source license and is available free of charge. X-Road is used as a national data exchange solution in Estonia, Finland, Iceland and many other countries around the world. Nordic Institute for Interoperability Solutions (NIIS) is a non-profit association with the mission to ensure the development and strategic management of X-Road and other cross-border components for digital government infrastructure. The republics of Estonia, Finland and Iceland are members of NIIS. In my talk, I’m going to give an overview of X-Road first. Then, I’m going to discuss the organisational structure of NIIS and the development model of X-Road. The main scope of the presentation is to discuss joint open source development in cross-border context.

Pots of Gold at the End of the Rainbow: What is Success for Open Source Contributors

Success in Open Source Software (OSS) is often perceived as an exclusively code-centric endeavor. This perception can exclude a variety of individuals with a diverse set of skills and backgrounds, in turn helping exacerbate the current diversity & inclusion imbalance in OSS. Because one’s perspective of success can affect one’s personal, professional, and life choices, to support a diverse class of individuals we must first understand how OSS contributors understand success. Thus far, research has used a uni-dimensional, code-centric lens to define success. In this paper, we challenge this status quo to reveal OSS contributors’ multifaceted definitions of success. We do so through interviews with 27 OSS contributors whose communities recognize them as successful, and a follow-up open survey with 193 OSS contributors. Our study provides nuanced definitions of success perceptions in OSS, which might help devise strategies to attract and retain a diverse set of contributors, helping them attain their unique “pots of gold at the end of the rainbow”.

Based on our report “Roadwork Ahead” we will look at the impact that tech funding has on social structures in FOSS communities. The original report (published in 2020) explores the unique nature of the community that builds and maintains FOSS, and the role that community takes in shaping an open Internet. It draws on interviews with contributors to FOSS projects to highlight the community’s strengths as well as its challenges. It finds that, while the community runs on trust-based relationships, self-organization and self-motivation, these foster a lack of organizational structure and low diversity among contributors. This results in a lack of different skills and perspectives that are necessary for running successful, sustainable projects, and lost opportunities to receive funding and other, non-monetary support. As the report, the talk will wrap up with a set of recommendations both for FOSS communities who want to be open to a more diverse group of people as well as funders, and outline how they can support the FOSS community more effectively.