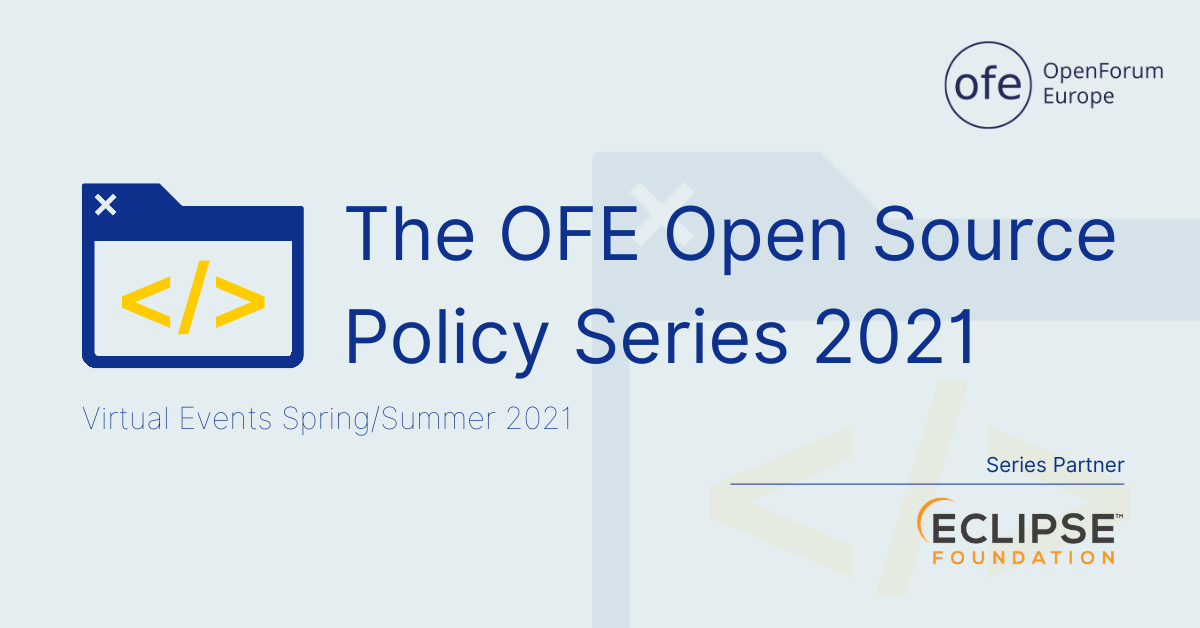 The OFE Open Source Policy Series 2021 offered deep-dives into the most policy-relevant topics in the area of open source, open technologies and the most pressing digital policy challenges facing Europe.

Following the EU Open Source Policy Summit 2021, where high-level policy makers such as European Commissioner Thierry Breton set the scene for what is at stake, the Policy Series was articulated as six virtual events during the spring and early summer. A large array of stakeholders, who work at the intersection of politics and technology, addressed the role of ‘open’ in crucial areas such as a European Chip Industry, the green transition in the energy sector, smart cities, institutional capacity building, digital sovereignty, and the EU’s competitiveness.

Together with our Series Partner, the Eclipse Foundation, we were glad to enhance the political debate at this critical juncture, as discussions of Openness move into a deeper understanding of the strategic role Open Source will play in Europe’s digital future. You can watch recordings of the whole series below.

With 68% of the world’s population estimated to be living in urban environments by 2050 – and a simultaneous projected rise in global population to nearly 10B people – the need to rethink our approach to civic infrastructure is ever more pressing.

How can we architect smart cities, with open source thinking, standards, data and technology, to best serve the needs of all of their residents? How can we engineer smart systems to respect citizen privacy while still delivering services effectively? What’s the most ecologically friendly way to deal with the ever increasing volume of data that smart cities and the smart objects that connect to them will generate?

At this event, we explored innovations of today in the smart city arena, some thoughts for creating the best of all possible futures, and the role of public private partnerships in delivering privacy respecting value to residents of these cities of the future, based on open source, open standards, and open data.

This establishment of Open Source Program Offices (OSPOs) to achieve open source goals is gaining momentum in the public sector, in academia and beyond. We see these developments on a city, regional, national and supranational level. This matters because the OSPO construct was a key enabler in unlocking vast amounts of value for the ICT industry. Now the question is how OSPOs in government, academia and NGOs can help deliver value for citizens the world over at scale.

In industry, OSPOs are well established and typically provide legal and support services for an organisation’s open source efforts. Generally speaking, OSPOs are built to achieve and accelerate policy goals which rely on open source and open tools. This includes systemic policy goals including privacy, security, trust, diversity, participation, and access to technology.

At this event, the panelists outlined the state of thinking around institutionalising open source work in the academic and public sectors (and beyond) and discussed how different OSPO configurations can help institutions to:

The European industrial landscape is changing rapidly. Today’s reality is that industrial processes, in all sectors, are increasingly software-driven, as we move towards digitisation, connectivity and increased sustainability. In the automotive sector, Europe’s ability to innovate in the area of cyber-physical systems, intertwining physical and software components, using technologies lays the foundation for the future for competitiveness. At the same time, today’s reality is that if something is about software, it is about Open Source.

In fact, Open source components are the essential building blocks of the digital transformation, comprising between 60-90 percent of the code base in modern software applications. The European automotive industry is increasingly turning to the Open Source model because it holds the opportunity to enable the transformation of the sector. Commonly used Open Source software components are developed and maintained by big industry, SMEs and communities, making better code available for sharing and reusing to everyone, so long as they comply with license requirements.

By pooling R&D resources in the software space, European industry can work smarter together, and bring products to market faster, on Open Source platforms designed by and for the European industrial manufacturers. These reusable components give developers a fast and free way to solve problems and add powerful features to their products without having to write new code themselves. As such, it holds the potential to turn fragmentation into strength in diversity, by networking our many European Digital SMEs, top-class universities and large manufacturers in state-of-the-art innovative ecosystems. This can truly unlock potential when delivering the Digital Single Market and digitisation of European industry.

OFE and Fraunhofer ISI have produced an ambitious study for the European Commission on the impact of Open Source Software and Hardware on technological independence, competitiveness and innovation in the EU. It is meant to be the reference study guiding open source-relevant policy for the coming years, but is relevant for jurisdictions globally. Open Source is not only a good path of digital transition for businesses and governments thanks to its reusability, transparency and innovation potential, but also based on its share in Europe’s GDP and economic activity.

Our research indicates that the economic impact of Open Source on the European economy was between EUR 65 and EUR 95 billion in 2018 and in the same year, EU countries and companies made significant investments into Open Source surpassing EUR 1 billion. The products of these investments are available for reuse to private and public sector and highly advance development and innovation.

Historical data shows clearly that Open Source has contributed immensely to economic growth in Europe, but if supported with relevant policies and actions, it could boost EU’s economic landscape even more. For example, if Open Source code contributions increased by 10% annually, European Union’s GDP would generate additional EUR 70 billion and could boost the number of ICT start-ups by 1,000.

Our panellists discussed these results and policies that could support European economy and openness in digital for a more innovative and competitive ICT landscape.

Chip shortages in the automotive sector have proven Europe’s dependence in the area of semiconductors. At the same time, Europe’s manufacturing industry is well-placed to solve these challenges by leading the next Open Revolution.

In its recently updated Industrial Strategy the European Commission identified 137 product dependencies in the most sensitive ecosystems. As the next open technology frontier, Open Hardware has the potential to be a tool to reduce dependencies and increase control.

The increased dynamism of Open Hardware should be taken into account from a policy perspective, and place a central role in any future-looking strategies. Ranging from 3D printing, the makerspace movement, collaboratively designed ventilators and medical appliances during the COVID-19 crisis to open chip design, Open Hardware has proven it is already disrupting the established production processes.

One of the most advanced areas in Open Hardware is open chips, a critical dependency for the European Union. Open chips have the potential to be beneficial in terms of their adaptability, speed and potential for increasing digital sovereignty in several sectors, including automotive industry, edge computing, data storage solutions, aerospace, energy or health.

By drawing lessons from Open Source Software, Europe can realise vast value from  Open Hardware for its economy and citizens. There is a need for more debate on opportunities and challenges of Open Hardware, its potential for scaling up and supporting more collaborative and open infrastructure underlying all other layers of the digital ecosystem we know.

The sustainability of our planet has become the defining challenge of our time. Digitalisation is a contributor to climate change but it must be part of the solution. The decarbonisation of energy production and distribution is one of the crucial challenges to be solved.

Europe’s energy sector needs to shift away from fossil energy sources to clean, digitalised and electrified systems with many distributed resources. This shifts the requirements for energy systems and grids, making it necessary to develop multilevel systems to be able to dynamically adjust, work across different geographies, functional layers and multilateral interfaces that are interoperable with each other.

As is the case in other sectors, the innovative and collaborative nature of Open Source Software is a critical factor to achieve the necessary digitisation of energy systems while enabling interoperability. Shared development across companies is necessary to execute fast in order to reduce the energy system’s carbon footprint.