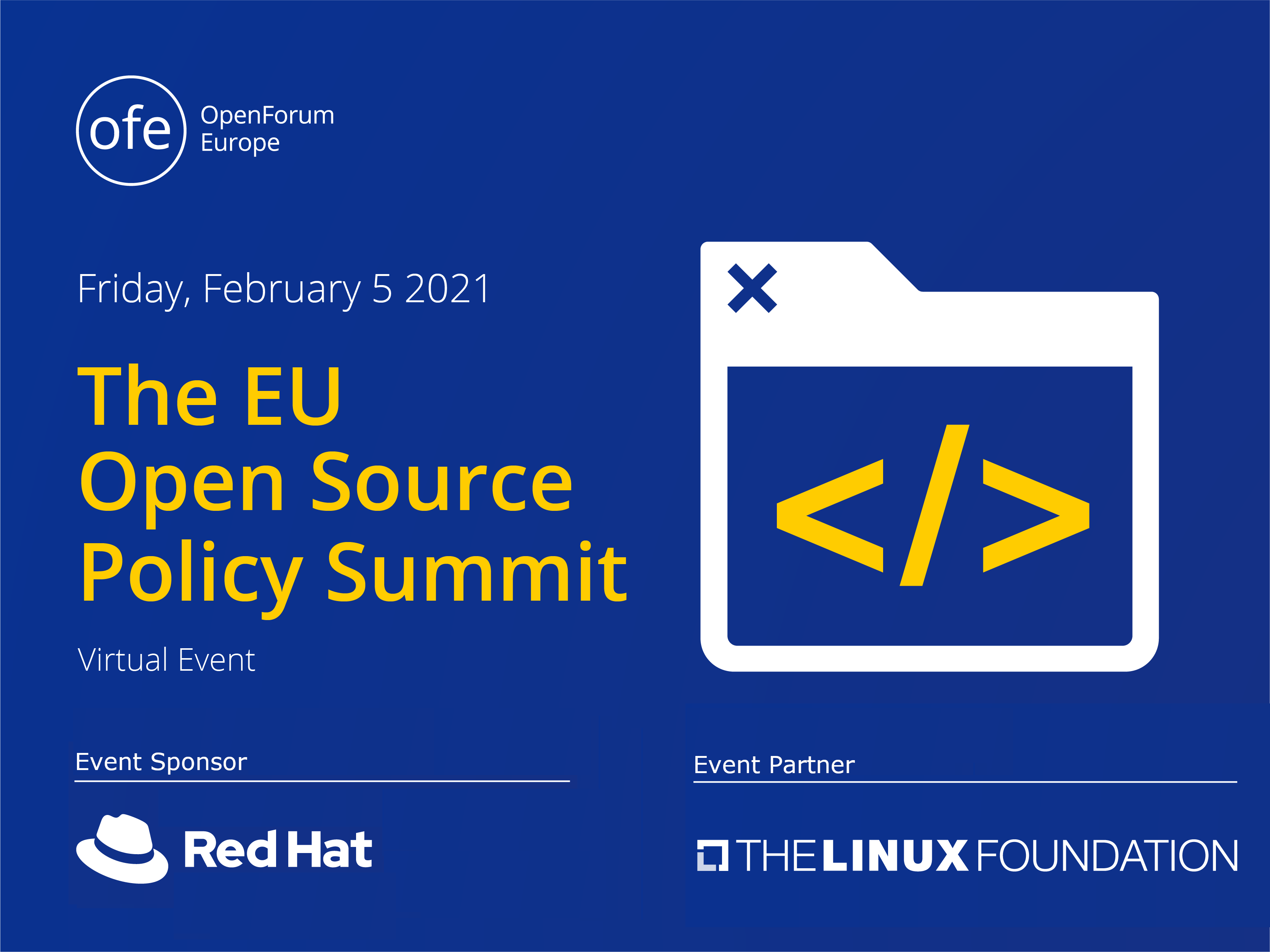 It’s becoming increasingly clear that ‘Open’ must play a central role as Europe addresses its pressing digital policy challenges. Open source and open technologies drive digital transformation in practice, and policies that support this process pave the way for European economic development and citizen empowerment. The EU Open Source Policy Summit will bring this squarely into the policy discussion.

With this Policy Summit, OpenForum Europe aims to facilitate an engaged and informed dialogue between a large array of stakeholders, who work at the intersection of politics and technology. Speakers and panelists will address the role of ‘Open’ in the green transition, the recovery packages, digital sovereignty and the EU’s competitiveness, as well as the sometimes polarized views of Digital Sovereignty.

In the end, we challenge ourselves to answer: how do we create a winning open source culture in Europe?

We look forward to enhancing the political debate at this critical juncture, as discussions of Openness move into a deeper understanding of the strategic role Open Source will play in Europe’s digital future.

Engineer, with a Supélec qualification in computer science, Thierry Breton begins his career as an entrepreneur in the new technologies sector. In 1981, he set up in the United States Forma Systems, an SME which he heads for 5 years. At the same time it publishes a number of science-fiction novels, including Softwar, sold at 2 million copies and translated into a dozen or so languages.

In France, he designs and then designs the Futuroscope, the first science and technology tourism park, between 1986 and 1990. In parallel, he was also elected regional councillor and then Vice-President of Poitou-Charentes from 1986 to 1992.

He runs a number of companies in the market for goods, as well as in the IT sector and new technologies. He was Director of the Strategy and Development, then Managing Director of Bull between 1993 and 1997. He then takes the lead of Thomson Multimedia, a global electronics company. In 2002, he was appointed to the head of the multinational operator France Télécom.

In 2005 he was appointed Minister for Economic Affairs, Finance and Industry of France, which he held until 2007.

Following his ministerial office, he teaches the governance at the Harvard Business School.

In 2009, he became CEO of Atos, a technology and digital service company until 2019.

He chairs ANRT, the National Association for Research and Technology until 2019. He is a member of the Technology Academy.

In 2019 he became the European Commissioner for the Internal Market. It is responsible for industry, services, digital, defence and space, as well as tourism and audiovisual.

Today, virtually all software products include Open Source software components, an increasingly large percentage of crucial software platforms and programs are entirely Open Source and the development and uptake of Open Source Hardware and Open Silicon are growing. This represents a paradigm shift from proprietary systems to more open, collaborative frameworks. However, there is no up-to-date, comprehensive analysis of the EU market and key industrial sectors.

The European Commission has tasked Fraunhofer ISI and OpenForum Europe to provide solid evidence for shaping European Open Source policies for the years to come. The core study team will present the final results of the European Commission Study on the impact of Open Source Software and Hardware, including economic impact analysis and comprehensive policy recommendations to augment and accelerate the benefits of Open Source for a competitive EU software and hardware industry and a sustainable digital transformation of the EU economy. Access the slides we presented.

During his more than 20 years as a software engineer, Wright has worked in the telecommunications industry on high availability and distributed systems, and in the Linux industry on security, virtualization, and networking. He has been a Linux developer for more than 15 years, most of that time spent working deep in the Linux kernel. He is passionate about open source software serving as the foundation for next generation IT systems.

In the last 12 month there have been impressive developments relating to Public Sector Open Source in the EU. Examples such as the new Berlin Declaration and the European Commission’s new Open Source Software Strategy prove the momentum Open Source is gaining in the government. Our panel of senior European public officials will speak about the role of Open Source in Digital Government and Innovation. How can ‘Open’ help solve the current and future challenges and bring the EU into the next Digital Decade?

The panellists will provide a broad ecosystem view of how Open Source connects and catalyses open innovation between ICT companies and traditional industry. Are these lines starting to blur? How do they see the economic impact of their Open Source use? What about Gaia-X’s Open Source ambitions? Where does Open Source fit in the upcoming industrial strategy and in the Commission’s view of standardisation efforts?

Globally, ICT companies have widely adopted the OSPO as best practice for dealing with Open Source. This practice is now not only spreading to all other industries, but also to the public sector and academia as well. One example is the EC OSPO presented in November 2020. Is the OSPO becoming the fundamental organisational building block of a global institutionalised Open Source ecosystem? What is the rationale behind these efforts and what is the projected impact? Why do these developments matter?

Fireside interview with Petra Heinrich of Red Hat and Sophie Proust of ATOS on Open Source in critical infrastructures across Europe. They will add a practical perspective on the findings in the Commission’s Open Source Impact Study. Open Source is today everywhere and at scale so this talk will touch on topics such as the public sector, decarbonisation, SmartAgri, the Olympic games, Gaia-X, to underscore the importance of openness to ensure access and scaling collaboration.

Get our news in your inbox.