The European Commission launched Interoperable Europe, the new policy framework for interoperability in the EU.

This story was originally published in the article for the Open Source Observatory (OSOR), a European Commission’s project aiming at providing trustworthy FOSS expertise and information. OFE is a regular contributor to the Observatory.

Funded by the Digital Europe Programme, Interoperable Europe builds on ISA2 and puts open cooperation with the Member States at its heart. 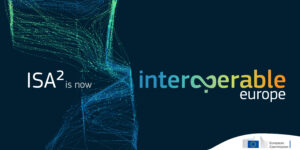 On 21 November, the European Commission announced the launch of Interoperable Europe, the initiative for a reinforced interoperability policy in the EU that replaces the ISA2 Programme and is funded by the new Digital Europe Programme, a new funding programme focused on digitalisation for businesses, citizens and public administrations.

Interoperable Europe represents the policy framework for pursuing, supporting, developing and promoting interoperability across the European Union. On the financial side, it is funded by the part of the Digital Europe Programme dedicated to interoperability. In this, one of the most relevant financial tools (with EUR 186.15 million allocated) is the European Digital Government Eco System (EDGES), which acts in support of public administrations and their cross border interoperability, amongst other services.

When asked what the lessons learned from the implementation of ISA and ISA2 programmes were, the Deputy Head of the Interoperability Unit at the European Commission Maximilian Strotmann focused on the motivation of the community to cooperate. Amongst several layers of public administrations, from the European down to the national and local levels, as well as across cultural borders and sectors, this project evolved from being a niche for a few people in policy, data and technology to becoming a structured cooperation. Collaboration in this ecosystem grew from a voluntary to a thorough and well-defined effort, which is needed for the European Union to identify, understand and work on the needs arising at the local and national levels. “If we combine the central level between the European Commission as well as the CIOs in the Member States and the local level, we believe that we have the information flows, the priority setting and the common investment into the tools and rules that we need”, said Mr. Strotmann.

The two-year ongoing work programme for 2021-2022 is considered a transition phase between previous programmes (e.g. ISA) and the new Digital Europe Programme. The main goal is to keep implementing the running programmes and at the same time adjust to the new priorities and needs identified on an ongoing basis by the European Commission.

For instance, the whole data policy environment (e.g. Open Data Directive, Data Act, Data Governance Act) is becoming one of the crucial sectors the EU has been focusing on. In this, semantic interoperability is seen as a key area to support data spaces, which do not only need pure data-exchange technologies and standards, but also have to be adapted constantly. To that end, supporting open source for the public sector is paramount. Enhancing cataloguing and nurturing communities within the public sector are tools that fell within the future scope of investment by the European Commission – together with interested partners at national, regional and local levels.

Therefore, compared to ISA2, strategic cooperation with the Member States is at the foundation of Interoperable Europe and the whole Digital Europe Programme. In this context, another relevant tool for innovation included in the programme is the creation of a GovTech incubator, which strives to build cooperation between private and public sectors. The idea at the heart of this project is to match public sector needs arising from the Member States with innovative start-ups and SMEs through quick and effective cooperation. Even though this design of private-public partnerships is not new as it has already been implemented in some parts of Europe, it has never been structured in such a systematic EU-wide way so far. GovTech is thought to help from the identification of such urgent and cross-sector needs to the investment in short-term agile projects with Member States and small companies. What is produced as a result of such projects will have to be open source and re-usable, and it could give a chance to small companies to compete and scale up.

Hence, Interoperable Europe holds openness and collaboration at its very core. “The culture of open cooperation and transparency is underlying the conception of the future interoperability policy for Europe, because without a culture of openness we cannot achieve any connected, interlinked and distributed public service across Europe. The technology that we need to produce and innovate is the outcome of this process” concluded Maximilian Strotmann.

To draw the baseline of Interoperable Europe, the European Commission took into account the results of the ISA2 interim evaluation, while the final evaluation will feed into the 2023-2024 work programme that will be developed in the first half of 2022.