The ​ Tallinn Declaration​, which was formally adopted by EU ministers on 6 October 2017, reflects some of the features of a Digital Government of the future: the Once only principle, ways to create trust in e-Government services using new technologies such as blockchain, and ways to measure the evolution from an analogue government towards a borderless one, for the benefit of​ ​ citizens​ ​ and​ ​ to​ ​ support​ ​ the​ ​ economy. Following publication of the Declaration, on 17 October OpenForum Europe organised a Round table to  touch upon some of these trends and examine the boost to political vision and citizen awareness stemming from the Declaration.

James Lovegrove from Red Hat (also chair of OFE’s Open Government Task Force), provided a brief context and core hypotheses for the speakers to consider during the event. He also challenged the audience to consider the Tallinn Declaration as a “game changer” by means of two polls which, by the end of the event, provided an almost unanimous opinion that successful implementation of the Tallinn D

eclaration over the next 12 months would constitute an inflection​ ​ point​ ​ in​ ​ Public​ ​ Sector​ ​ digital​ ​ transformation.

Jaana Sahk, Digital Counsellor from the Permanent Representation of Estonia towards the European Union, presented the Tallinn Declaration. She argued that it sets the path for the modernisation of digital services in the public sector, and then explored the changes that the Tallinn Declaration will bring about. For example, she explained that in relation to electronic signatures, the Declaration mandates its signatories to create opportunities for their citizens and enterprises to use their state’s services digitally, and without​ ​ any​ ​ need​ ​ to​ ​ leave​ ​ their​ ​ homes. 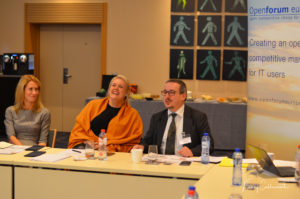 MEP Kaja Kallas pointed out that whilst the Declaration is a good step, it will be necessary to wait until full implementation of its principles before being able​ ​ to​ ​ form​ ​ a ​ ​ clear​ ​ opinion. Following this, she pointed out two areas of particular relevance for her: Digital Identities, and the Once Only principle. She considers that the uptake of these two initiatives is not taking place as fast as it should be. She also mentioned the need for governments to change their mindsets and help citizens to comply, instead of punishing them for doing illegal acts. 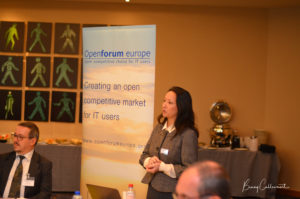 Pierre Damas, Head of Sector at the European Commission, explained that in the Commission, Free and Open Source Software (FOSS) is technically now treated equally with its proprietary counterparts. He then ​shared with the attendees some of the Commission’s plans for updating its Open Source Software Strategy and identified the key barriers, such as lack of skills or interoperability between different pieces of software. With this in mind, he stated that his aiming is to overcome these barriers by (for example) introducing an internal simplification of the current ICT infrastructure in the Commission, and reducing the cost of transition towards FOSS products. Moreover, he wants the Commission to become a player in the FOSS community, contributing back to the projects that it uses.

A full report of the event can be found here.